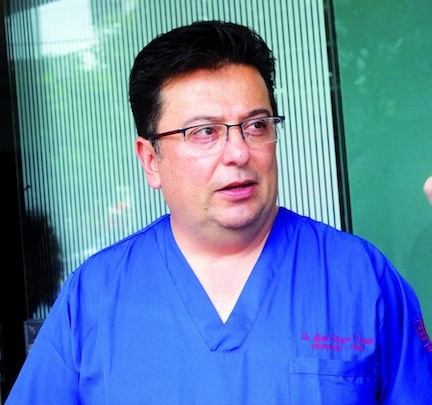 I grew up in Barrancabermeja, Colombia, and went back to Barrancabermeja after medical school. After completing a specialization in pediatric medicine (2007) I went to work at the Intensive Care Unit of the Clínica La Magdalena.

My commitment to community health has extended beyond the clinic’s walls, embracing the defense of human rights and the environment. In 2015 I founded an organization to defend the wetlands, which then evolved into the Corporación Yariguies the following year. In my work as both an environmentalist and a physician I have drawn attention to mercury contamination of the city’s water supply associated with a sanitary landfill that threatens a protected wetland, and I have actively opposed fracking in the region in light of the threat it poses to the water supply, among other reasons.

I also participated actively in a campaign to remove the mayor of Barrancabermeja for failing to act to protect the public health and the environment, earning me the wrath of certain local political and economic elites. According to the Corporación Regional por la Defensa de los Derechos Humanos (CREDHOS), a leading human rights group based in Barrancabermeja:

“Blanco has argued that fracking in Barrancabermeja and the surrounding region, known as the Magdalena Medio, would have a direct negative impact on the San Silvestre environmental protection zone, which provides water to the city, and is a strategic corridor for protected species such as the jaguar. The zone is being negatively impacted by the sanitary landfill operated by the company Rediba.”

I have been the target of smear campaigns on social media, threats, and criminal proceedings on trumped up charges. Indeed, I was pushed out of my job (as of June 30, 2017) and driven into exile (I left Colombia in November 2018). CREDHOS also reports: “Any number of complaints and judicial proceedings have been brought recurrently and systematically by a small yet powerful sector that sees in Dr. Yesid Blanco an obstacle to the furtherance of their interests.”

Some of the criminal investigations that I am currently facing:

First, the Office of the Attorney General (Fiscalía) is pursuing a case against me for terrorism, related to my reporting on the occurrence of mercury in the water in Barrancabermeja. This finding was later confirmed by the Fiscalía, which asked a judge to have the legal representative of Rediba’s sanitary landfill arrested; she is currently being held.

Second, the Office of the Attorney General has a criminal investigation under way for procedural fraud, since I filed a motion for special constitutional protection (tutela) on behalf of the population of Patio Bonito, a village in the district of La Fortuna, in Barrancabermeja, where the sanitary landfill operated by Rediba is situated.

Third, there are criminal investigations into alleged slander. The accusations have mostly been made by the municipal administration or by third persons related to it, who are angry at me for having exposed the acts of corruption behind the operation of the sanitary landfill.

Fourth, the Office of the Attorney General is pursuing a criminal investigation for procedural fraud and counterfeit document, allegedly for issuing a false medical certificate to a patient I saw in my private practice. Yet I have evidence that this is not so, which has been presented to the medical ethics tribunal, where a proceeding is also pending over the same facts.

This last investigation was begun on the heels of being forced to leave my job at the Clínica La Magdalena, which is where I obtained the findings of children affected by contamination of the drinking water.

Though I have turned to the Office of the Attorney General, as the agency entrusted with criminal prosecution, to report the threats and harassment targeting me, it has moved sluggishly, unlike some of the cases against me. As it appeared increasingly likely that I would be arrested in connection with these cases, in early November of last year I left Colombia.

I was nominated for the National Award for Defense of Human Rights in Colombia, sponsored by DIAKONIA Sweden, in 2017, as Defender of the Year.  And in 2018 I was recognized by the International Organization for Training and Medical Research (IOCIM) with the award for medical achievement for better living, as the best specialist in my area in Latin America in terms of making contributions aimed at identifying the causes of diseases.