Defending Dissent: SLAPP Lawsuits and the Fight For Free Speech 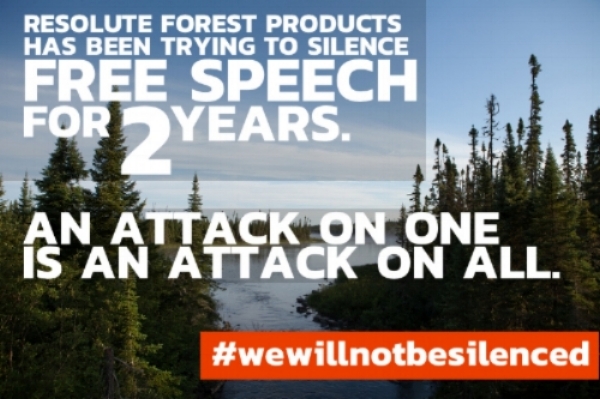 And then the corporations came for free speech.

On May 31, environmental activists and organizations will face off against logging giant Resolute Forest Products in the U.S. District Court for the Northern District of California.

For years, environmental defenders including Greenpeace and Stand.Earth (formerly ForestEthics) have criticized Resolute for its unsustainable logging practices in the Canadian Boreal Forest. In 2016, Resolute sued environmental defenders including Greenpeace, International, Greenpeace, Inc., Greenpeace Fund, Inc., Stand.Earth, and five staff members of these organizations. Resolute claims that the environmental defenders’ advocacy practices amount to racketeering and other illegal activities intended to rob it of its profits. As an equal opportunity bully, Resolute also has an active lawsuit against Greenpeace Canada and two of its staff members for defamation and economic interference that has wasted time and resources for over five years.

Resolute is employing a type of lawsuit called a SLAPP, or a “Strategic Lawsuit Against Public Participation.” As the Public Participation Project (PPP) explains, SLAPPs are, in their nature, anti-free speech and anti-debate. They are targeted towards individuals or organizations who speak out in a manner of which big corporations disapprove. According to PPP, the objective is “…to silence and harass critics by forcing them to spend money to defend these baseless suits…[which] are intended to intimidate those who disagree with them or their activities by draining the target’s financial resources.”

In this case, Resolute filed a $300 million lawsuit alleging violations of the Racketeer Influenced and Corrupt Organizations Act (RICO). The case was originally filed in a court in Georgia, but was transferred to California after Resolute failed to sufficiently tie the case to Georgia, perhaps signaling that Resolute was trying to take advantage of the fact that Georgia has weaker anti-SLAPP laws than California. The first version of the lawsuit was dismissed in court, with the judge noting that, “…the defendants’ speech constituted the expression of opinion, or different viewpoints that [are] a vital part of our democracy,” but Resolute amended its case and refiled the same meritless claims.

Resolute is not the only corporation employing this tactic to silence activists. Energy Transfer Partners (ETP) filed a $900 million lawsuit in the United States District Court for the District of North Dakota alleging violations of the RICO Act – the same Act cited by Resolute – against Greenpeace International, Greenpeace, Inc., Greenpeace Fund, Inc., Banktrack, and the movement Earth First!, all in response to the demonstrations opposing the destructive Dakota Access Pipeline at Standing Rock. Activists from these organizations have opposed the pipeline, which cuts through Native American lands without their consent.

In this case, according to Bloomberg, ETP “…accused Greenpeace International, Earth First!, and other groups of inciting terrorist acts and vandalism to generate publicity and raise money for their causes while hampering the Dakota Access pipeline operator’s ability to raise money for projects.” Essentially, ETP’s team of lawyers is attempting to portray months of grassroots activism and and the exercise of free speech as a racketeering scheme.

Lawsuits like these are not just another routine court proceeding: they are an attack on free speech. The First Amendment gives activists and citizens the right to speak out and raise awareness about exploitative and unsafe corporate practices, and to demand accountability. Closing civil society space is a global problem, with corporations and governments intimidating, silencing, harassing, and sometimes killing activists all over the world.

By employing SLAPP lawsuits in the United States, corporations like Resolute and ETP are continuing this dangerous trend and attempting to capture our legal system to intimidate public interest organizations and individuals into silence. Incidentally, the law firm promoting these malicious and frivolous legal tactics, Kasowitz Benson Torres, also represents President Donald Trump.

The eventual decision in this landmark case will have major implications for the future of free speech and advocacy in the United States. We are hopeful that this case is again dismissed and that the court will uphold the spirit of the First Amendment, sending a strong message to Resolute, ETP, and any other company that attempts muzzle those working for the public good. Abusive lawsuits will never stop activists from speaking to truth to power.

We will not be silenced.

Defending Dissent: SLAPP Lawsuits and the Fight For Free Speech

Protect the Protest Task Force Launches with a Promise: An Attack on One is an Attack on All